Welcome back, folks. When I was writing my last blog, I mentioned We would be in the car until We got to San Fran…that was true, however, even with all the awesome things We had done already that day, it was only midday and there was still a half days more awesomeness to go. Follow closely, keep your hands and arms inside, let’s go!!

We did get to San Francisco next and the GoldenGate Bridge is breathtaking.

I had seen pictures of it before and when I was in high school, Golden Gate University was one of my first choices for college. (too bad its not free, ya know) I had spent alot of time looking up pictures of the city, and what people do there, when I was about 17. 10 years later… it’s amazing. The first place We went to, Fort Point National Historic Monument, was situated just beneath the bridge so coming up to it, getting close and going under and then driving across it were some of the first things I got to do when We got there.  That’s it there at the bottom left on the water’s edge in the picture above. 🙂 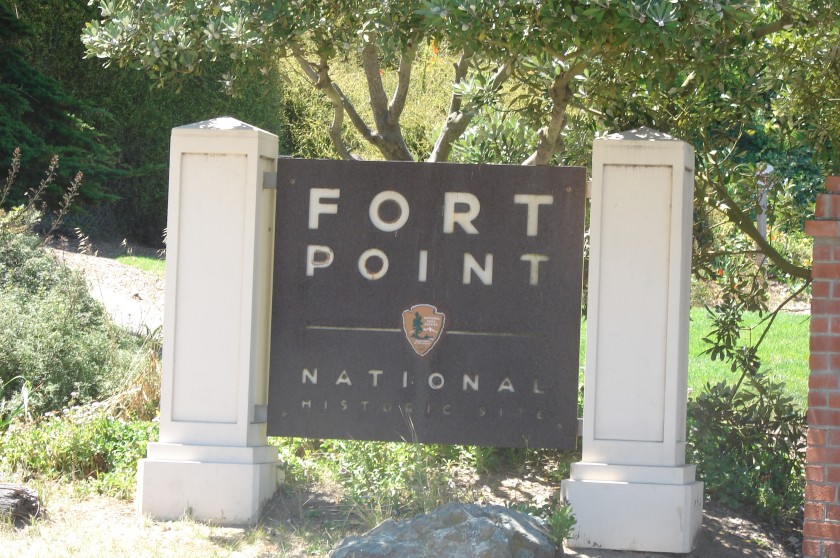 Cali was born in California and spent quite a few years of His childhood there, so He gets a majority of His enjoyment in going back from seeing me delight in novelties like that. Most of what We are doing is stuff He has never seen or done before and its a surprise to both of Us, but like Hollywood and the bridge and Santa Cruz…those were just extras 🙂 After going over the GG bridge, and driving through the Golden Gate National Recreation Area,

We went to Muir Woods.

We drove around for about 15 minutes looking for parking. There were people parking sooooo far away and walking probably 20 minutes to go to this place. We decided to pull up in the front and let me just run inside to get a stamp for my passport book while He waited in the car driving in circles. As We entered the “closed/full” lot to get to the front door, someone happened to be leaving-so We got front row parking. It was a pretty amazing parking spot. I’m just sayin.  We went inside and stamped my book and then walked around out in one of the only remaining “old growth” Coastal Redwood forests on the planet.

It seemed fake walking around there-like a movie set or something. The tallest one there is within 50ft of being as tall as the statue of liberty!  There was not a breeze or sound besides the people in there; and many people there were. We did about a 1 mile walk around in the woods and then got back on the road to another National area, Point Reyes.

We got to Point Reyes and got the stamp for my passport, but the lighthouse isn’t open on Tuesday or Wednesday (what??) The lighthouse is pretty awesome and even though there are 308 steps to it, it was something We definitely wanted to see.  Oh well 🙂  There were many beaches and trails for Us to explore on the Point anyway so We drove out to a few places and took some amazing pictures. It’s a peninsula on the coast of northern California so when you look out across the water, just like most of the other places We have visited, you see nothing. Its the end of the earth 🙂 Since its a peninsula, there is tons of coastline with many different backdrops and entrances making each one unique.  One of the beaches there is called Drake’s Beach. It is definitely the most beautiful beach there (that We saw).  A glimpse…

There are many amazing landscapes at Point Reyes, but the Drake’s Beach environment went unsurpassed.  We made sure to stop there when a friend of mine from high school recommended it as one of her favorite places. Thanks Linds!! We hiked around a few miles taking in the view of the entire peninsula and getting some exercise. We walked all the way to the edge!!

We saw tons of cows:

We experienced 2 different climates directly across the street from each other. On the south side of the peninsula, it was warm and sunny with bright blue water:

on the northern coast of it there was lots of wind and clouds with grey, choppy water:

We left Point Reyes for Oakland 🙂 big change of scenery. It was dark by the time We got to the apartment. Pat was just getting home from work and We were glad to be out of the car for a while. We would be exploring many fun things in San Francisco over the next 4-5 days and staying with some very rad people.

Who are these people and why do We love them?  What did San Francisco treat Us to?