Welcome back, folks.  After the beautiful drive to the Grand Canyon, We arrive at the South Rim campground just as the sun went down.

We bought a tent earlier in the month and never practiced setting it up, nor did We bring flashlights…did I mention We are new at this camping thing?

Flashlight, no biggie, there’s an app for that 🙂 and We both had Our phones, so I guess We had “flashlights”.  The tent had instructions sewn into the carry bag and true to the description on the package, it was easy to set up.  We had it set up in the dark in under 15 minutes!!  Go.Us.  We blew up the air mattress, read over the Grand Canyon publication We were given at the entrance while making hotdogs over the fire pit, and hit the hay.  It was kinda chilly at night, but We snuggled and life was good.  Just after 4am, We were awoken by some sprinkles of water…couldn’t possibly be rain, I mean We checked the weather a billion times and checked it even as Our faces got a bath.  We left the “fly” (cover) off the tent in order to keep a breeze blowing through, but We got up and put it on at that point.  I think putting the cover on your tent might be the anti-rain dance since the sprinkling stopped almost immediately.  Whatevs.  We went back to sleep and got up around 8am to attack the visitors center with questions before attacking the canyon itself.  We came to the Grand Canyon last year with Cali’s BFFF in early may on the way to Las Vegas for APP, but only had a few hours to walk around before We had to leave and check in to the hotel 😦 We saw some awesome sights, walked a little down “Bright Angel” trail and succeeded in not falling off any cliffs.  This year, We had 3 whole days to spend checking out everything the South Rim has to offer.  After barraging the ranger at the center with questions about what to do that wasn’t going to be crowded or isn’t very popular or is a must see, We went to get some more ice (10lb bag for 4 freaking dollars!), some coffee and start Our exploration.

We began by taking the free, environmentally friendly shuttle bus from Our campground to the rim trail and started hoofin it.  Due to the unexpected rain rolling in, their was a nice breeze and fantastic cloud cover most of the day.

Not all day, there were sunny times, but it was a very lovely day for a walk.  We took the rim trail for about 3-4 miles,

took many pictures of the amazing canyon,

walked out onto some ridiculously high overhangs into the canyon to look down and scare myself thoroughly while having my picture taken.

We got back to camp in the early afternoon and Cali made Us an amazing meal on the fire.

Beef and veggies wrapped in foil pouches cooked in charcoal heat for about 45 minutes with spices OMG it was delicious.  While We were at Our campsite, the next campsite over had some strange noises coming from it so We looked closer and realized that the gazebo they had left up when they went out for the day had 3 GIANT ravens caught in it.

They had left some trash and some food inside it, and even though they had zipped it up, the birds had walked in under the door opening and couldn’t get out.  Well, they could, but they were trying to fly out and could not.  They kept getting their claws stuck in the mesh walls and falling to the ground and then flying back on to the picnic table instead of just walking out the way they came.  Ugh.  There were signs all over the campground letting epole know that the ravens are a known issue and to keep your stuff locked up and put away.  So, good samaritan that I am, I went over, scared to  death (Cali armed with the camera), and unzipped one wall, hid around the corner and pulled open the side.  Dumbass birds kept flying into the closed side!!  Cali pulled open the other side and they finally flew out.  Not even 15 minutes later, about 5 or 6 smaller birds (finches and the like-palm sized birds) were stuck in the same fashion trying to clean up after the ravens.  We had zipped it, but they hopped in just like the big ones.  There was trash and bird poo ALL OVER the place in there.  Broken stuff…it was a mess.  I let out the small ones and decided if it happened again, it was not my problem.  Didn’t happen again.  Whew.

What did happen was it started raining and hailing.  Hailing.  So what did We do?  We took a nap 🙂 and after We woke up, the skies were clear and begging Us to get back on the shuttle and go see the sunset.  We got out there about 2 hours earlier than the sunset time to find a good quiet place to sit together.

We found a ledge to sit on that hung over the canyon and had a perfect view of the sunset. 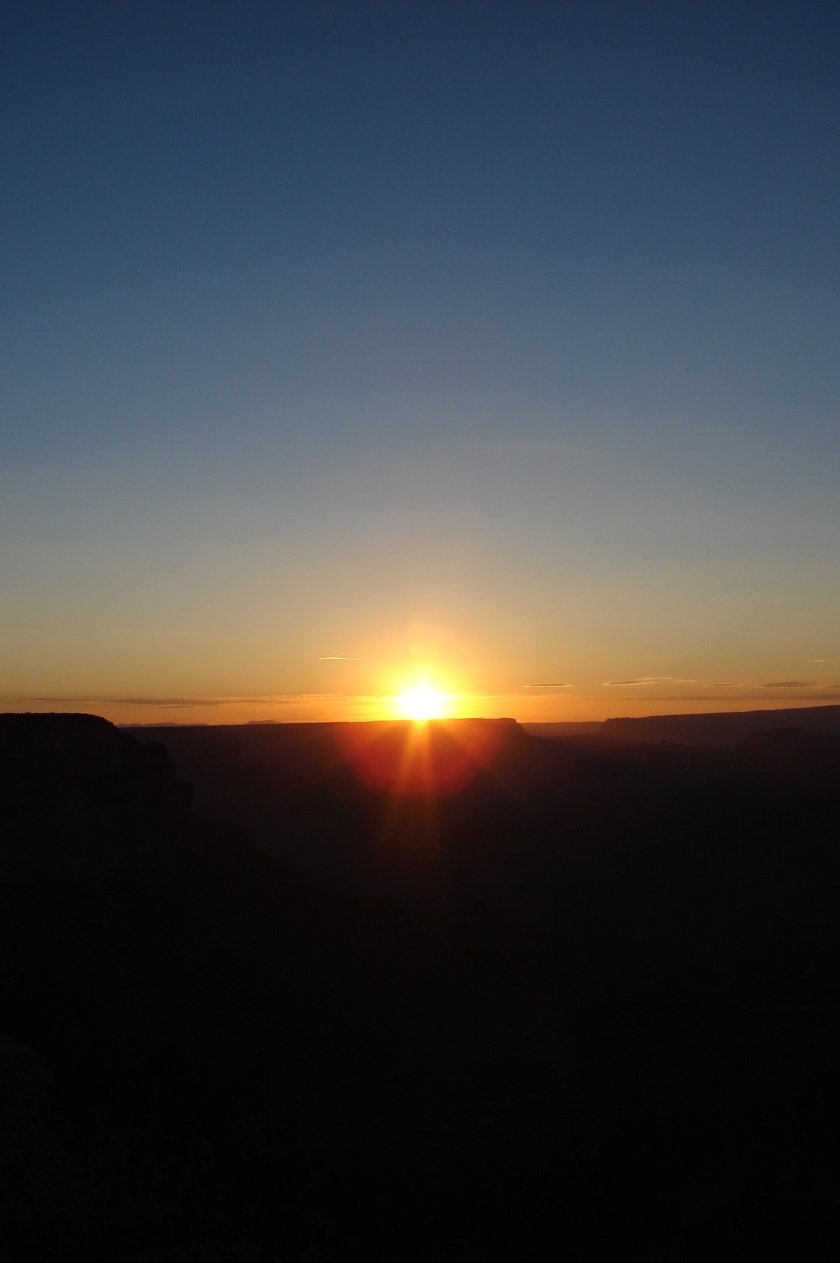 We stayed long enough for it to get dark and chilly and then went on a FULL MOON WALK!!  Yes, that’s right, We hadn’t planned it, but it was a full moon that night and let me say-the Grand Canyon under the full moon is magical.  No point in taking pictures, you’d never see them, but lets say it is probably the most enjoyable and beautiful 2 mile (+/-) walk I ever walked.  He and I were surrounded by moonlight and silence…and the biggest hole Ive ever seen.  It was terrifying and amazingly serene.   *pretty awesome*

Even after all that awesomeness, We would be up again at 330am…the sunrise was sure to be just as fabulous!

One thought on “Grand camping!”