Friday April 30th We left Stephen’s house in Albuquerque, New Mexico and made Our way to Las Vegas, Nevada… eventually.

First, We had a date with some more nat’l lands.  3 more, actually.  First on the list was El Malpais.  When We got there, the ranger was extremely friendly.  We talked to her for a few minutes and realized that this was not the coolest place We would see on Our way, but We didn’t have much time for the others so We stamped Our passport book, and hurried to the next site.

It was snowing when We arrived so We weren’t able to climb to the top, but We were able to walk some of the path towards the top.  Surprisingly, it was sunny and almost warm during Our walk, but We could still see the storm dumping snow on the Natl Monument.  The sky was crazy blue just next to the storm:

We came upon a water hole that was very peaceful.  So peaceful in fact that I had to make a video =)

We saw some signatures of previous visitors to this place from long ago and that was pretty cool to see the dates and names of people and groups that had been to this place long before Us.

We walked as far as We could up the trail until it was closed due to snow and went back to the car to continue on to Our next destination, which was in:

Our stop in Arizona was: 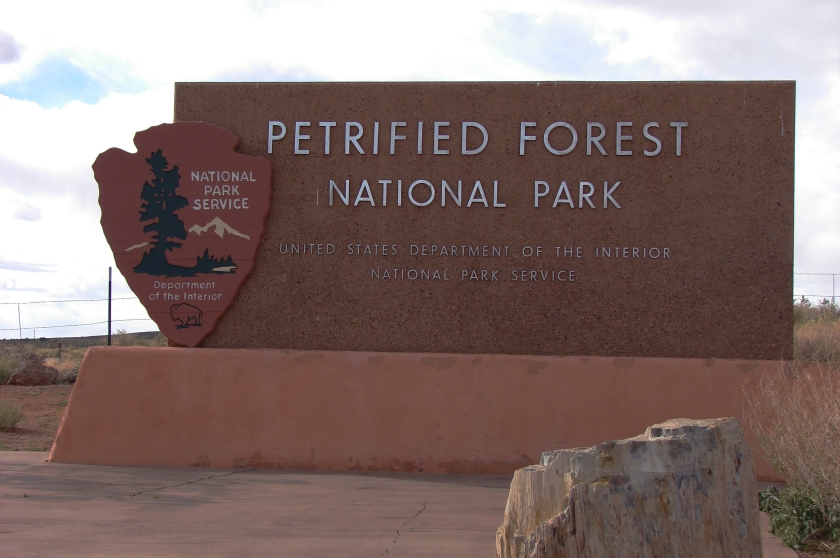 The forest was basically a 30 mile scenic drive that went through the painted desert to the Rainbow Petrified Forest.  It was beautiful.  There were several scenic overlooks, hiking trails and picnic areas along the way.  I have heard of the “Painted Desert” before, and now I know why people call it by that name…all the mountains and rocks look as if someone painted them.  Some have stripes, some are solid colors but all are strangely beautiful yet odd.  Here are some random pics:

Towards the end of the drive We start seeing petrified wood:

When We got to the visitor center, there were amazing pieces of petrified wood that looked like fine stone.  I guess it kinda is…

We walked the nature trail there and saw a fallen petrified tree that was huge:

I stood by the base of it for comparison:

If you would like to see the rest of Our pictures from the journey to Vegas from ABQ, the album is HERE

After leaving the Petrified Forest, We continued on to Las Vegas.  Of course We crossed the Hoover Dam, but it was dark so I have nothing but this:

After the dam, there was nothing until We saw this:

While the photo is  blurry (because I forgot to switch the setting on the camera), approaching Vegas at night is nothing short of amazing.  Seeing the glowing city rise up in the middle of a pitch black desert is breathtaking…not just the first time either.  I have seen it many times, and it never fails to catch me off guard.  We arrived in Las Vegas around 1am and were greeted by some of my very good friends Angela and Rylan Helmuth…

The rest, is for another day.